There are several types of roses you can get to put in your garden. Many roses are called repeat flowerers that will bloom over a long period of time. They have a main flush of blooms in spring and then again after a summer prune. They will flower right into the cooler months until they lose their leaves.

Some rose varieties will only have the spring/summer flush of flowers with the odd bloom after that. Many of these varieties are climbers and the original Rosa rugosa varieties.

Roses are often sold ‘bare rooted’ which means they have been dug out of the ground and wrapped in damp sawdust and paper and placed in a plastic bag and then sealed. The rose can stay like this for quite a few weeks until it is sold.

Some rose bushes are notoriously bad growers or flowerers. They might produce leggy stems with few flowers and won’t put on as much growth as a ‘good’ grower. They do however have beautiful flowers and might be worth your while if you really like the variety.

Roses are also catalogued according to perfume strength and style. A rose can have different types of perfume:

Flower types vary from rose to rose and they can be: 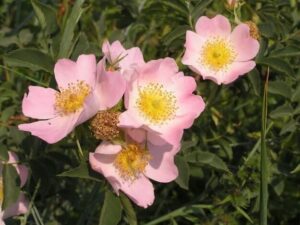 A single flower with one row of petals

Colours of the flowers varies greatly from vivid whites through to creams, lemons, yellows, oranges, pinks, to reds and crimson, pale lilac to deep purple and deep black reds. Some varieties are stripy in different colour combinations and some have eyes in the centre of the flower: 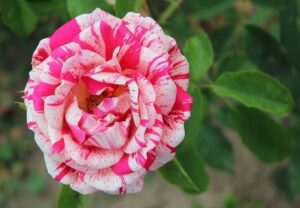 Stars and Stripes, one of the striped varieties 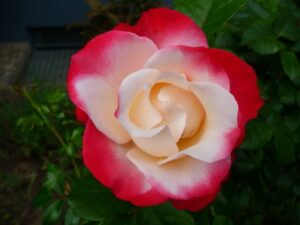 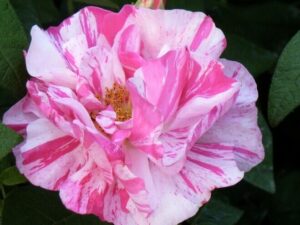 These roses were developed by crossing an old polyantha rose that have lots of flowers with a hybrid tea. This produced a plant with many heads of flowers. Floribunda is a Latin term meaning “many flowering”. The flowers tend to be smaller than a hybrid tea but there are masses of them to make up for their smaller size.

These tend to smaller bushes than the hybrid teas, with more leaves and more flowers. These roses have bunches of blooms rather than one or two on long stems. They make a great show in the garden and usually flower over a long period of time. These look great as standards as you can see the heads of flowers better. A row of these make a great display and you will be the envy of your friends. Some of the most popular and prolific flowerers are the Iceberg varieties, Iceberg, Pink Iceberg, Burgundy Iceberg. You can cut the flower heads for cut flowers but you need to wait until the last buds have coloured up to ensure that they open inside. 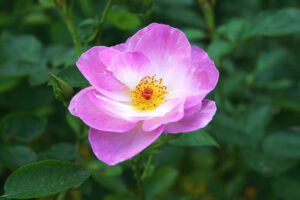 This is the variety to grow if you want cut flowers on longer stems. They have single buds on stems and not a bunch of buds on the end of a stem like the floribunda’s do. These are the most popular variety of roses in the world today and are a hardy variety that will repeat flower. The bushes are upright and can grow to around 6 feet tall.

The flowers on hybrid teas have a high centre, are well formed and larger than floribunda and many other rose varieties. The bushes have less leaves than floribunda varieties and can look quite stark in some garden situations, but if you are after beautiful cut flowers these are the varieties for you. There are hundreds of varieties of these roses and they come and go in popularity. If you are after a certain rose, you will eventually find it if you look hard enough and visit every rose grower you can find. 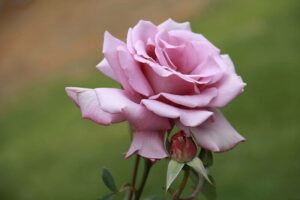 This term is used to describe a rose that has been grafted onto a straight stem to around four feet tall. The desired variety is grafted onto a rose root stock. There will be up to four branches grafted around the stem. Practically any rose can be made into a standard bush as it is just grafted onto a stem.

These are the same as standard roses but are grafted onto a shorter stem. They are ideal for pots on the patio or verandah, hence their name. You will often see more than one variety grafted on these roses, with a red/white or pink/white combination. These are ideal for the balcony or small gardens as they will not turn into huge bushes. Prune these in the same way as any other rose, taking extra care to remove crossing branches to open up the centre of the bush. 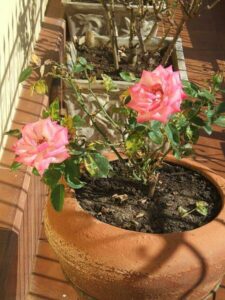 These are the rose bushes you see in most people’s gardens and parks. They are still grafted but not onto a stem of any great length. You would have seen these in the supermarkets and nurseries as bare rooted two year old plants. These are the most common form of rose to buy. They make amazing displays when mass planted in solid colour blocks or assorted colours. The display in the photograph below with four beds on roses includes over 700 separate bushes. Each bed is planted roughly in two rows with enough room to get in between the plants to prune them and keep weeds down. Each year the bushes are wood chipped with the older woodchip being forked into the soil. 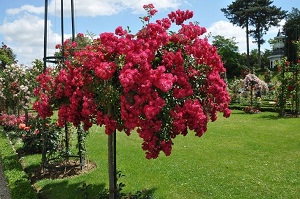 Many of the most popular roses over the years have been released as a climbing rose. You will not find every variety as a climber but these are wonderful trained over arches or other supporting frames. Some of these will only have one flush of flowering in summer. Climbing roses come about as sports or mutations from the original bush rose. They generally have a full flush of flowers followed by sporadic flowers til the end of the flowering season. 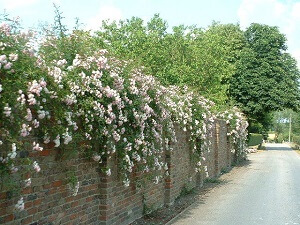 These have become very popular in the last twenty years as they produce a spectacular display as they spread up to 4 to 6 feet across the ground. The flowers are not really suitable for cutting as the stems can be quite short. Many of the flowers are in large bunches like a floribunda. These are grown for their massed flower display. The flowers have little or no scent and are repeat flowering. The growth comes mainly from the base of the plant and they look wonderful falling over the edge of retaining walls and at the front of garden beds as a floral border.

These varieties were very popular in the 1880’s and then more or less disappeared for many years. They are twiggy shrubs between 6 and 36 inches in height and are the most hybridised. Most bushes are between 12 and 24 inches tall. The colours are the same as found in hybrid teas and all flower shapes are represented. 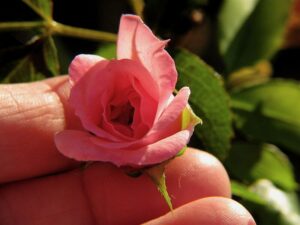 Many new varieties are bred so as not to have any thorns. This is a boon for some gardeners who hate being pricked by roses. The Iceberg range of roses as fewer thorns than other varieties and the flowering floribunda heads of these roses have no thorns on the new growth. Only the older stems have thorns.

There are several varieties that are nearly thornless and these only have thorns on the older wood like the Iceberg varieties. These varieties are good for near paths and if you have children as they won’t get pricked as much if they get close to the bushes. 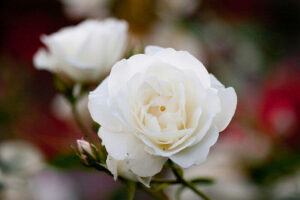 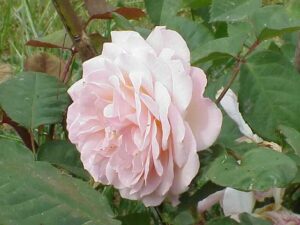 These varieties of roses have been developed by English grower David Austin and are the old fashioned cabbage rose flower style. The flowers are very full and packed full of petals. The colours are solid with the outer ring of petal sometimes a paler shade. Rose growers either love or hate these roses. Many people prefer the traditional rose flower style and won’t have these in their garden. The flowers are spectacular and the colours very intense and they all have a lovely perfume.

These roses come in a lovely range of colours from white through to lemons, yellows and oranges: the palest pinks to the darkest crimsons and pale lilac to deep purple.

Many of the varieties come in a climbing form as well as the bush rose. An asterisk means there is a climbing variety as well.

These are the seed pods of a rose. Not all cultivars will produce hips as they have been cross bred so much to produce a colour or flower shape. Many of the older varieties produce rose hips and these can have many medicinal and kitchen uses.

Rose hips have been shown to have some healthy properties and have been used in floral and fruit teas. They give the tea a distinct pink or red colour. They also have anti-inflammatory properties and can be bought from chemists and many supermarkets.

How to Plant and Design a Knockout Rose Garden