15 Easy Remedies and Treatments for Orchid Pests and Diseases

Orchids are beautiful plants and look breathtaking when in bloom. Now that you have taken to growing this exotic plant you must have realized that when you grow orchids you may at some point of time face problems that are caused by pests or disease.

Learning how to recognize, diagnose and treat the ailments is essential so as to become a good grower of orchids.

Orchids usually do not suffer from the ailments which usually affect many of the garden plants. As many of the species of orchids and various hybrids that are grown in your garden are new to your local atmosphere they are also not familiar to many diseases and pests that affect other plants in your garden.

Another reason that the orchid plant is able to stay relatively unaffected by pests is because they are grown mainly indoors and are not exposed to the problem. Once a problem occurs, though, it can be tough to clear up.

Let us see a few of the problems that you can face with your orchid plant, that are caused by pests:

If your orchid plant is being attacked by slugs you will be able to tell by their silvery trails.

Remedy: To get rid of slugs at regular intervals, you can sprinkle a good quality slug liquid. Placing chemical baits are another way of controlling the pest. Diatomaceous earth and ash can be used to create a barrier.

A hole in one of the healthy orchid leaves or irregular margins due to missing chunks indicates the presence of weevils.

Remedy: You will have to spray a pesticide every 5 days for a period of three weeks to completely eradicate the pests.

These are sucking insects that attach themselves to the underside of the leaf, rhizomes, leaf axils and psuedobulbs. While growing the orchid plant you are likely to come across two types of scale.

One attacks Phalaenopsis particularly. It migrates to most other plants that have soft leaves. To spot the scale you will have to look on the underside of the leaves. If only one or two scales are present, take a cloth that is soaked in methylated spirits and wipe the leaf clean.

Remedy: You can start a systemic insecticide regime by spraying for a 5 days for three weeks. The insecticide is absorbed by the plant making it poisonous to its attacker.

4. The Second Type of Common Scale

Primarily attacks Cattleyas and their cousins. They are capable of adapting to devouring orchids of different varieties like Vanda’s.  The Boisduval scale can be seen as round, flat scales present on the underside of the orchid leaves. When left unattended it produces thousands of nymphs that can destroy your entire collection of the beautiful orchid plant.

Remedy: The pesticide Doff, is effective for controlling and killing this pest. The leaves should be cleaned and scrubbed gently with a toothbrush that has been dipped in methylated spirits. This will help in removing any old sheaths and also in eliminating the majority of the adult scales.

It usually appears like a cotton wool ball that can be seen around leaf axils. They are also present inside sheaths of new shoot of the plant.

Remedy: The pesticide, Doff, is beneficial in keeping the mealybug off. If the pest is localized, then cleaning the leaves with a cloth soaked with methylated spirits on a cotton is helpful. Remove the infected leaves and sheaths so that the mealybug does not have a place to hide. 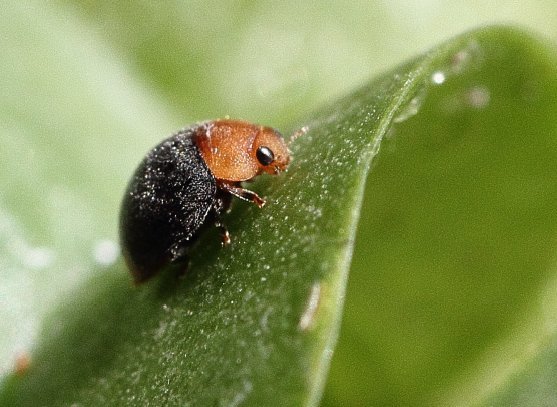 They are tiny sucking insects that transmit disease from one plant to another. They feed on flowers. The buds of the infested plants do not open, flowers are deformed, roots are girdled and the leaves appear silvery and pitted.

Remedy: the plant and flowers should be sprayed with Malathion, Orthene or safer soap. The leaves should be wiped clean with a cloth dipped in methylated spirit. This should be done once every few days as it will help in killing the eggs.

These small red to brown arachnids can be found on the underside of the leaf. Webbing or brown splotches may be seen. The upper side of the leaf shows a silvery surface that turns brown and become sunken, later. Lack of chlorophyll makes the leaves spotted or streaked.

Remedy: a miticide like Avid or Talstar should be sprayed 3 times at an interval of 4 days. Mites can be controlled by increasing the humidity and wetness of the leaf as mites flourish in dry and warm weather.

These are small sucking insects that affect the buds, flowers as well as new growth. The leaves exhibit a sticky deposit while the buds fail to open.

Remedy: the plants should be washed with a jet of water. Pesticides like Malathion should be sprayed.

They attack new growth of the plant as well as flowers and buds. The white fly is a moth like insect. An indicator of their presence is a cloud of white insects rising from the plant when it is shaken or moved.

Remedy: weeds should be removed to prevent infestation.

The plant should be sprayed with Malathion, Orthene or safer soap at regular intervals of 4 to 5 days.

Orchids can be infected by virus, bacteria or fungus. It is extremely important to monitor orchids for diseases as they can kill all your lovely plants by spreading from one plant to another. Let us see the various infections that are capable of ruining the beautiful orchid plant.

It is not common for the orchids to have a virus infection. There are about 26 viral diseases that affect orchids. Viruses spread by contact of sap to sap in plants. This can happen due to use of infected tools or because of an aphid infestation.

There are subtle symptoms of virus infections that initially look like any other orchid diseases. Often a slight yellow or whitish streaking is seen, this progresses to a brown pitting present on the leaf. The leaf may be bleached out in severe cases along with brown pitting and brown and black streaking on the underside of the leaf. The damage seems to penetrate through the leaf.

There is no cure for infections through a virus. The spread of the infection can be prevented by taking a few precautions.

Use gardening tools that are sterile while cutting leaves or flowers.

Sterilize the tools before and after using them to divide plants.

Use a new pair of clean latex gloves while repotting or dividing orchids.

Orchids should be watered individually. It is not recommended to use one bucket of water for watering multiple plants.

Orchids should be potted individually. The newspaper on which the plant and the growing medium are placed should not be used again for the next plant.

As there is no cure once the orchid plant is infected with orchid virus, it is advisable to dispose the plant before it infects other plants. 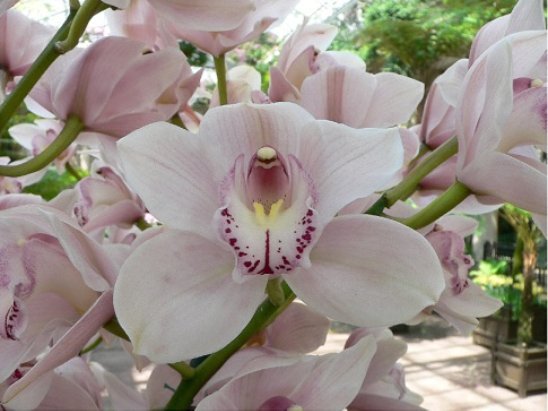 Orchid roots and leaves that have fungus infections present many problems. If left untreated, it can lead to rot, yellow leaves and even the death of the orchid plant. Precaution should be taken to avoid fungus infections.

On cool or cloudy days do not water the orchid.

To avoid rotting of the root do not water the plant excessively.

Ensure proper ventilation and circulation of air in the room by opening the windows or switching on the fan.

The growing medium should be changed before starts to decay.

The fungus should be treated immediately before it can infect other orchids.

If the orchid plant is left to stand in water or in a growing medium that is rotting, it can develop black rot in the leaves and the orchid roots. Soft rotted areas are seen on the leaves and also the new growth. This is likely to spread to the roots and can kill the plant.

The leaves that are infected start by looking purplish brown initially and then they turn black. The infected outer edge is yellowish.

Remedy: Cut off the infected area along with a half inch of the healthy tissue.

Tools should be sterilized with alcohol after each cut or by heating briefly with a flame.

The orchid should also be repotted with new potting material in a new pot that is sterile. It should be watered moderately till the time the orchid has recovered.

The plant loses its vitality over a period of a few months and eventually dies. The plant looks stunted and droopy. On the roots black and brown blotchy areas are seen. Yellow leaves are seen that appear gnarled.

Remedy: The roots that are rotting are cut off.

All infected areas are also cut.

The tools should be sterilized with alcohol or heating before each cut.

Repotting in a sterile pot with new potting material is recommended.

The plant should be saturated with a fungicide following the directions on the label.

The injured leaves are affected by the fungus. It appears at first, as yellow leaves. Initially, it is seen on the underside, but spreads to the top of the leaf with time. It later presents itself as small brown roundish sunken spots.

Orchid bacterial diseases are mostly caused by high humidity and temperatures. They mostly have a very visual presentation.

It presents itself differently in different orchids:

Phalaenopsis: it spreads very rapidly. The plants is completely rotted in just 2 to 3 days. The bacteria enter through the wounds.

Dendrobium: the leaves look water soaked and yellow. They turn black and sunken.

Paphiopedilum:  Small, round spots are seen on the leaf, near the middle. These spots are yellow and water soaked at first, but later turn reddish brown and sunken. The spot enlarges and spread fast turning the orchid into a dark, shriveled mass.

Remedy: Cut the infected tissue with a sterile instrument. Bactericides like Physan or copper compounds should be sprayed on the plant that is infected and also the adjacent plants. Instructions on the labels should be followed. Overhead watering should be avoided. Also, the leaves should be kept dry and air circulation increased.

This is the most common disease in Phalaenopsis orchids. It is a severe infection. The leaves present the symptoms as soft, small, water soaked blister. They can be present anywhere on the leaf. The spots are dirty green in color at first. The infected spot enlarges, coalesce and eventually become brown or black, dried up and sunken. They ooze bacteria-laden liquid. The disease is most prevalent when the weather is warm.

It is present in the following as:

Phalaenopsis: blister-like spots are seen that have a pale green or yellowish halo. The spots spread fast and the plant dies if the infection spreads to the crown.

Cattleyas: older leaves are infected through wounds on older plants. The infection appears as sunken black spots. It spreads slowly and is usually not fatal.

Remedy: First, cut the infected tissue with a sterile instrument. Then, the plant should be disinfected with a spray of bactericides like Physan or copper compounds. Adjacent plants should also be sprayed upon. Follow the instructions on the label. In addition, copper should be avoided on Dendrobium or blooming plants.

How to Care for Phal Orchids

How to Grow and Care for Cymbidium Orchids